Alternative Acts explores ways in which artists attempt to explore their culture and identity via issues such as gender, class and race. Through individual approaches, artists consider what identities represent – showing how identity can be affected by circumstances, including censorship, racism, political upheaval and war.

Moving image programme, Displaced Belongings screens alongside the live performance of M.A.C.H.O., which can be dipped into and out of during the live event.

Displaced Belongings is a programme of film and video focusing on how Asian artists’ identities have been shaped by the impact of issues such as immigration, language, censorship and queerness. It includes recent work by Mao Haonan (China) , Bella Riza (UK), Suneil Sanzgiri (US), Su Hui-Yu (Taiwan), Wu Chi-Yu (Taiwan) and Mathis Zhang (China). The films Action, Almost Unable to Think by Mao Haonan (2018) and At Home But Not at Home by Suneil Sanzgiri (2019) have not been shown in the UK before.

*Pre-book your tickets to guarantee entry* 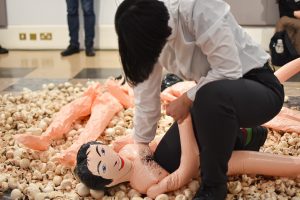 ‘M.A.C.H.O’ situates a symbolic conversation between female/queer masculinity and a fetishised man-like figure, creating an absurd companionship. Throughout the performance, Chow reveals a “failed” masculinity on gendered, sexed, raced and marginalised bodies to problematise hierarchies of masculinities in western capitalist society.

Whiskey Chow is a London-based artist and Chinese drag king. Coming from an activist background in China, Whiskey has been engaging with political issues in her practice, Whiskey also explores female masculinity, stereotypes and cultural projections of Chinese/Asian identity. Studied at Royal College of Art (UK), Whiskey interdisciplinarily making performance, moving image and experimental sound piece. Prior moved to the UK, Whiskey has worked closely with local queer communities in Guangzhou and contributed as actor, co-playwright and sound designer in the production of ‘For Vaginas’ Sake’ (2013) (將陰道獨白到底, the original Chinese version of The Vagina Monologues).

Alternative Acts is curated by Moritz Cheung for Platform Asia. Delivered in association with videoclub and BACKLIT, and supported by Arts Council England.