VIDEOCLUB in collaboration with protoPLAY presents : The YouTube Thing

The YouTube Thing is a curated screening of videos from YouTube, selected in collaboration with Nadege Derderian and Orion Maxted from protoPLAY. A screening of touching, angering, curious, visceral and ever-so voyeuristic pieces, taken from the mass contemporary ‘archive’ of YouTube.

(arrive early to get your free tea and cake!)

Olsen Olsen is a DIY collective that, for the last three years, has been intermittently screening avant-garde cinema with tea and cake at Leeds’ Hyde Park Picture House. For this one-off event organised by videoclub, Olsen will present an afternoon programme of new moving image works by established and little known international artists – served with tea and homemade cake (vegan too). Expect lyrical, personal and abstract experimental cinema from people who care.

A limited edition recipe/film booklet will also be made for the event. For further information about films and Olsen go to: www.olsenorsen.org 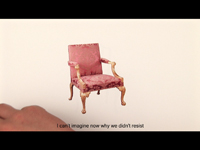 The Chair, Grace Schwindt A selection of international work from videoclub’s most recent call for artists’ moving image. All the works selected focus upon auto/semi/biographical content that has been made by filmmakers who are using artists’ moving image to approach their subject matter, rather than straight documentary format. Fleeting glimpses, broken narratives and the use of image over language reveals the structure of memory and recall, as a fragmented, and re-narrated/imagined phenomenon, as opposed to a simple narrative line.

The Chair, Grace Schwindt A selection of international work from videoclub’s most recent call for artists’ moving image. All the works selected focus upon auto/semi/biographical content that has been made by filmmakers who are using artists’ moving image to approach their subject matter, rather than straight documentary format. Fleeting glimpses, broken narratives and the use of image over language reveals the structure of memory and recall, as a fragmented, and re-narrated/imagined phenomenon, as opposed to a simple narrative line. 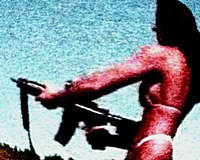 Guli Silberstein – REMAINS Fragments and distortions, filters and reappropriated imagery comprise this surprising collection of moving image works. Found footage and original recordings are dispersed with twisting narratives. Bare and latent concepts, and intertwining philosophies appear to comment on violence, consumerism, and other fragmented human actions. Broken repetitions in The Horror and Ozymandias are unsettling whilst poetic, whereas FIXC’s and Nilsson’s films provide us with octane-driven feasts that comment on consumerism and our fixation with popular culture.

For a map, and the full programme for VIDEOPHILE, see Phoenix gallery’s website above. 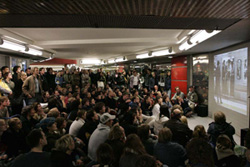 On the 25 October, A Wall is a Screen (Hamburg) will be making a moving image tour of Brighton, exploring the walls and screens of the city, re-imagining the city through film.

Hamburg-based A Wall is a Screen have created a moving image tour of Brighton, weaving through the city’s back streets and hidden walls, as well as open public spaces that are perfect for screening films. Follow the tour and see excellent, new short films in surprising spots around the city. You will probably want warm clothes and possibly an umbrella.

Meet outside The Pump House pub (46 Market Street, near Donatello’s, see map below) at 8:00pm, look for the A Wall is a Screen logo. The tour will last approximately an hour.

“The project A Wall is a Screen takes advantage of the nightly downtime in the vitality of the downtown area. It is a combination of a guided city tour and a film night. The group of participants walks through downtown and stops at bright walls where short films of various genres are shown. After the end of one film, the group continues on to the next wall and film”. – From A Wall is a Screen’s website.

This event is part of the Brighton WHITE NIGHT celebrations

Transactions, Yin-Ju Chen (2008) This outstanding selection of work by UK and international artists features contrasting and complementary images and narratives, many taking an artistic approach to documentary filmmaking. From the formal and atmospheric vistas of Annalisa Sonzogni’s landscapes, to the funny and touching chronicles of DJ Steve KRUSHER Joule’s life, sensitively filmed by Jordan Baseman, these works are thoughtful, engaging and beautiful, with the strength to resonate long after seeing them.

Selected from open submission, this excellent collection of film and video celebrates outstanding practice from UK and international artists working in moving image.

Human beings tend to end up wanting something out of reach. This collection of stories offers some different insights into the situations that drive our passions. Among the stories: dancers have operatic visions of escape, criminals find their world spun upside down and a few women attempt a new relationship with a special someone in their life.

A selection of work by filmmakers from northwest USA and west coast Canada. Part of an exchange programme between Northwest Film Forum, Seattle and videoclub, Brighton.